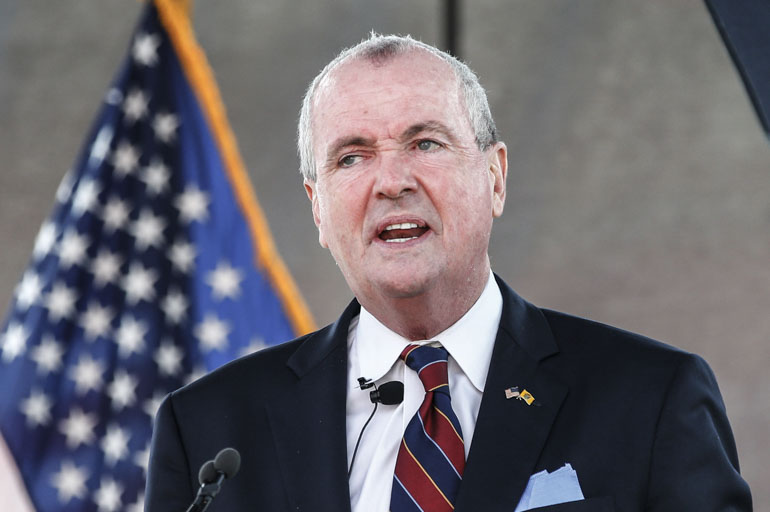 FILE - In this Aug. 25, 2020, file photo, New Jersey Gov. Phil Murphy speaks during his 2021 budget address at SHI Stadium at Rutgers University in Piscataway, NJ. On Wednesday, Aug. 26, 2020, the Justice Department sent letters to the governors of New Jersey and three other Democratic-led states, seeking data on whether they violated federal law by ordering public nursing homes to accept recovering COVID-19 patients from hospitals, actions that have been criticized for potentially fueling the spread of the virus. (AP Photo/Noah K. Murray, File)

Working from the template created by New York’s failed fit of pique after the Bruen decision was handed down, the Second Amendment pit of despair that is the state of New Jersey enacted its own law tightly regulating and restricting the issuance and use of concealed carry permits. Both states severely restricted the number of locations that the few citizens who have carry permits can legally tote a firearm.

But, as in New York, New Jersey’s law is running up against a frustrating complication most of us know as the United States Constitution. Today, a federal District Court Judge pronounced the new law unconstitutional and blocked its enforcement with a temporary restraining order.

The State may regulate conduct squarely protected by the Second Amendment only if supported by a historical tradition of firearm regulation. Here, Plaintiffs have shown that Defendants will not be able to demonstrate a history of firearm regulation to support any of the challenged provisions. The deprivation of Plaintiffs’ Second Amendment rights, as the holders of valid permits from the State to conceal carry handguns, constitutes irreparable injury, and neither the State nor the public has an interest in enforcing unconstitutional laws.

While good news, the grant of the TRO only means the judge thinks there’s reason to believe the plaintiffs challenging the law have a good chance of prevailing on the merits when the case is eventually argued. In the mean time, here’s the Firearms Policy Coalition’s press release announcing today’s order . . .

Today, Firearms Policy Coalition (FPC) announced the successful acquisition of a Temporary Restraining Order against multiple aspects of New Jersey’s new gun control regime. The Opinion in FPC’s Koons v. Reynolds, along with other case documents, can be viewed at FPCLaw.org.

“[A]t oral argument, this Court specifically pressed the State whether it had empirical evidence to suggest that concealed carry permit holders are responsible for gun crimes or an increase in gun crimes in New Jersey, which they cite as justification for the law. However, the State had no such evidence,” the Opinion states.

“Within seconds of Gov. Murphy signing this insidious bill, FPC Law filed a challenge to its constitutionality,” said FPC Director of Legal Operations Bill Sack. “We are thrilled that the Court has wasted no time in preventing its enforcement and the irreparable constitutional injury that would have otherwise been suffered by our Plaintiffs and all of the peaceable people of New Jersey.”
FPC is joined in the litigation by Second Amendment Foundation, Coalition of New Jersey Firearms Owners, and New Jersey Second Amendment Society.
Individuals who would like to Join the FPC Grassroots Army and support important pro-rights lawsuits and programs can sign up at JoinFPC.org. Individuals and organizations wanting to support charitable efforts in support of the restoration of Second Amendment and other natural rights can also make a tax-deductible donation to the FPC Action Foundation. For more on FPC’s lawsuits and other pro-Second Amendment initiatives, visit FPCLegal.org and follow FPC on Instagram, Twitter, Facebook, YouTube.
Tags: 2a gun control second amendment