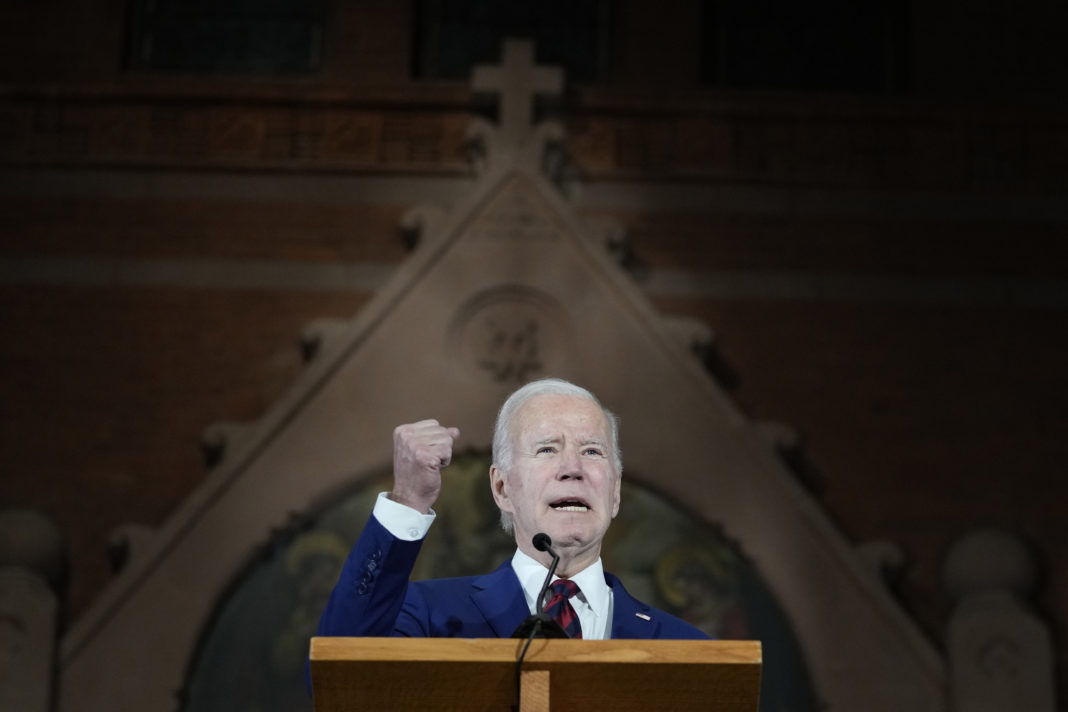 President Joe Biden speaks during an event in Washington, Wednesday, Dec. 7, 2022, with survivors and families impacted by gun violence for the 10th Annual National Vigil for All Victims of Gun Violence. (AP Photo/Susan Walsh)

The definition of chutzpah is murdering your parents and then throwing yourself on the mercy of the court because you’re an orphan. Today, President Joe Biden may have just established a new definition for ‘hypocrisy.’

Biden attended something called the National Vigil for All Victims of Gun Violence last night at St. Mark’s Episcopal Church in Washington, D.C. It’s an annual event put on by Newtown Action Alliance Fund, a gun control advocacy operation. Whatever its ostensible purpose, the vigil is designed to put pressure on lawmakers to further limit Americans’ Second Amendment rights through the passage of more restrictive gun control laws.

Biden became the first President to attend the vigil and, naturally, used the opportunity to, once again, call for another “assault weapons” ban and a limit on magazine capacity using all of the rhetorical skills, precision, and command of the facts for which he’s become so well known.

Even as our work continues to limit the number of bullets that can be in a cartridge, the type of weapon that can be purchased and sold, the attempt to ban assault weapons — a whole range of things that are just common sense. Just simple common sense.

But, you know, we did it before. You may remember. In the ‘90s we did it with the help of the very people in here, led by Speaker Pelosi in the House and many others.  And we did it.  And guess what? It worked. The number of violent mass murders reduced were significant. A lot of people’s lives were saved.

You know — and we can do it again.

Biden’s attendance brought praise from all of the usual suspects.

Another thing that’s truly amazing is the coincidence of The Washington Post publishing this  hagiography of Michael Bloomberg’s favorite sock puppet, Shannon Watts the next morning. What are the odds?

And then today the White House made news, announcing another Big Win™ for the administration. They’d reached an agreement with the gangsters who run Russia to release WNBA player Brittney Griner. Griner, if you haven’t been paying attention, was sentenced to nine years in jail for drug possession after she “inadvertently” brought cannabis vaping cartridges with her on a trip to Moscow in February.

The Biden administration vowed to “work tirelessly” to get her out. What that meant in practice was they enlisted the help of Saudi Arabia to broker a deal to spring the basketball star.

This, of course, is the same Saudi Arabia that Biden vowed to make an international pariah during his 2020 campaign.

The deal was brokered with Vladimir Putin, responsible for the genocide in Ukraine – and with the help of Saudi Crown Prince Mohammed bin Salman, just 48 hours after the U.S. dropped a lawsuit holding him responsible for the murder of Saudi dissident journalist Jamal Khashoggi.

What did Biden give up to spring Griner? He agreed to release someone named Viktor Bout, one of the worst humans in the world. Bout is (was) a Russian arms dealer nicknamed the “merchant of death,” who sold guns to bad actors all over the world, primarily in Africa as well as to the Taliban Al-Qaeda.

Bout was serving a 25-year sentence on charges that he conspired to sell tens of millions of dollars in weapons that U.S officials said were to be used against Americans. Biden issued an executive grant of clemency to free the arms dealer from a federal prison in Illinois to effect the prisoner swap.

Meanwhile, another American, Paul Whalen, an ex-Marine, is still rotting in a Russian penal colony on charges of espionage. His case apparently wasn’t as much of a priority for the Biden White House as springing a prominent basketball player.

So let’s sum up, shall we? The President made a show of his attendance at a “gun violence” vigil last night that was drenched in politics. He made an ostentatious display of the sympathy, care, and concern he feels for the survivors of gun violence, while using the event to call, yet again, for a ban on some of the most popular firearms in the country. He dearly wants to outlaw again a subset of guns that are used in a tiny fraction of crimes committed in this country, and whose ban thirty years ago was an utter failure.

Yet as Biden was delivering his comments last night, demonizing legally-owned guns and quoting scripture about the light not being overcome by darkness, he was — at that very moment — releasing an illegal international arms dealer whose business helped to kill hundreds of thousands of people…Americans included.

Given the weapons that Bout sold to Al-Qaeda and the Taliban, it’s reasonable to guess the arms he trafficked to America’s enemies killed more Americans than all of the lawfully-owned AR-15s and AKs in America ever have.

Let’s also remember that Biden moved heaven and earth to free a woman convicted of cannabis possession while his own Drug Enforcement Agency continues to list it as a Schedule I prohibited substance, one that can and has been used to take away Americans’ gun rights if they run afoul of the law here.

The business of politics and politicians — whatever their party — is kissing babies, lying on the campaign stump, and pissing on the public’s leg while claiming it’s raining and promising to do something about the weather. There are probably more nakedly cynical and hypocritical instances of elected officials doing what they do, but it’s difficult to think of one that comes close to this gag-inducing example.