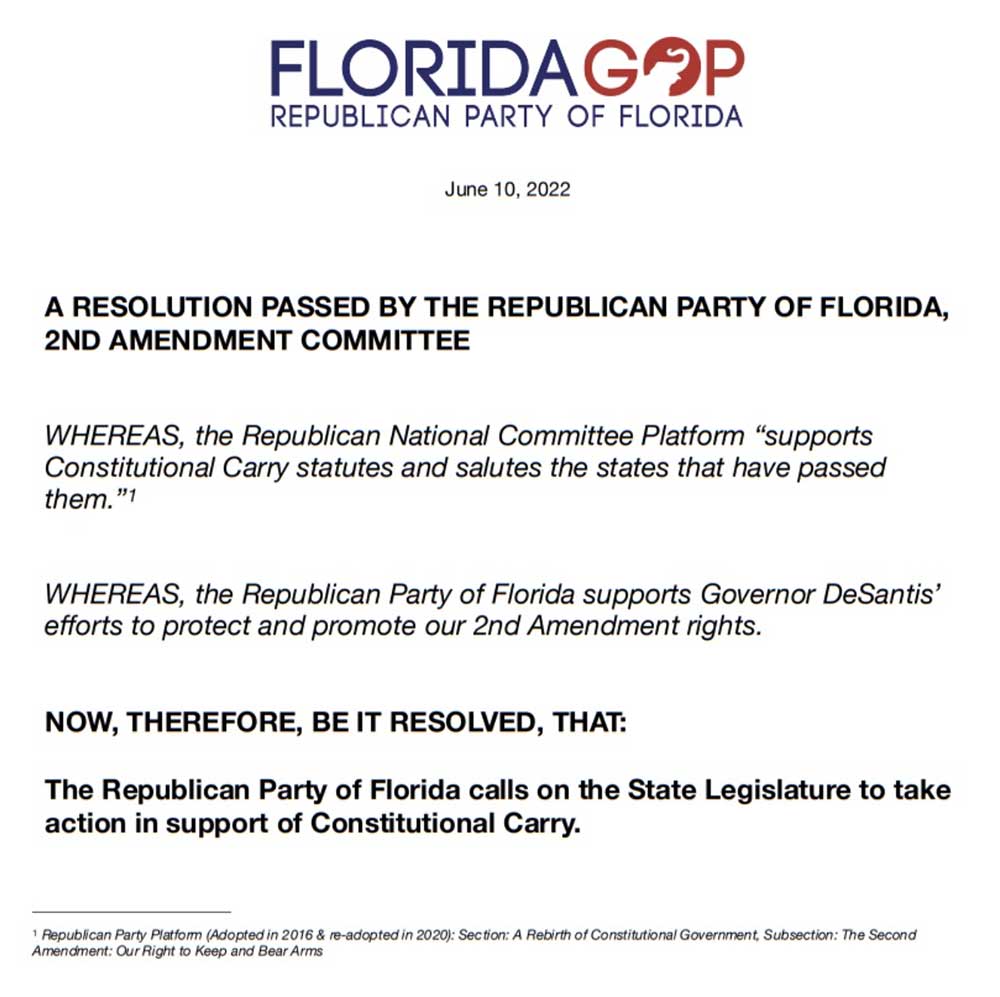 It has been a long hard fight to get to where we are today. We have a Governor that has pledged to pass Constitutional Carry before he leaves office, and it appears we have a new legislative leadership that is open to advancing pro-gun legislation. This is all due to your hard work.

Unfortunately, I’ve received word from multiple independent sources that the fight for a true Constitutional Carry bill isn’t over.

Our sources have told us that the Florida Republican-controlled legislature is only willing to advance a permitless, concealed-only carry bill, not full Constitutional Carry. It seems that the legislature is still averse to the idea of Floridians fully exercising their Second Amendment rights via open carry, something our fellow Americans do in 47 other states.

“Well, we’ve had a majority this whole time. I’ll let Paul answer that because I’m ready. [looking over to incoming House Speaker Paul Renner] Are you going to do it?” Paul Renner responded with a “yes.”

Let’s break down the Governor’s statement. He didn’t just say he supports Constitutional Carry, he politically called out the Republican-controlled legislature for its collective failure to pass it during prior sessions.

The Governor said, “We’ve had a majority this whole time.” That is very important, because it is true.

Florida has had a Republican majority in the legislature for over a decade now and it appears that the legislature is playing the same games again with our gun rights and now making Governor Ron DeSantis look bad. Becuase if he can’t get a true Constitutional Carry bill signed into law, did he really keep his pledge?

What I need you to do is contact Gov. DeSantis and your lawmakers. Tell them you want a true Constitutional Carry bill, not some watered-down permitless carry bill. And tell them you want open carry to be part of any legislation that moves forward.

The excuses being thrown around the Capitol are the typical ones you’d expect, like “It will affect tourism!” or “There’ll be a rise in crime!” or “There will be blood in the streets and Wild West shootouts in our communities!”

25 states have Constitutional Carry and more are on the way. 47 states have legal open carry. In those states, tourism hasn’t been affected, crime isn’t rising, and blood isn’t running in the streets. The facts speak for themselves. Our lawmakers just need to hear that from you.

So, please send a message to Governor DeSantis and your legislators to let them know you want a true, Constitutional Carry bill and will settle for nothing less.

P.S. Please send a message to Governor DeSantis and your legislators to support a true, “no-compromise” Constitutional Carry bill in the upcoming, Florida legislative session. Please share this alert to every Florida Patriot that you know and donate to Gun Owners of America.