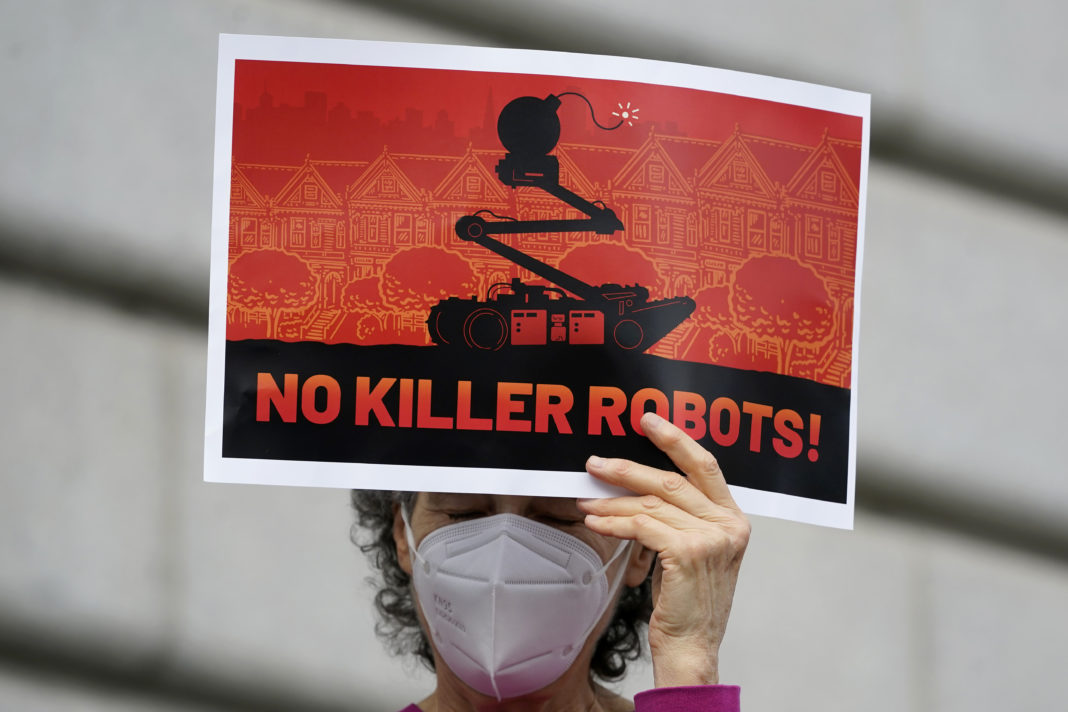 A woman holds up a sign while taking part in a demonstration about the use of robots by the San Francisco Police Department outside of City Hall in San Francisco, Monday, Dec. 5, 2022. The unabashedly liberal city of San Francisco became the unlikely proponent of weaponized police robots this week after supervisors approved limited use of the remote-controlled devices, addressing head-on an evolving technology that has become more widely available even if it is rarely deployed to confront suspects. (AP Photo/Jeff Chiu)

in the end, it was probably only a matter of time before San Francisco, America’s wokest city, caved to the hand-wringing and pearl-clutching of the political left. That city’s board of supervisors has now reversed an earlier decision and rescinded its approval for police to use lethal robots against barricaded suspects in extreme, life-threatening scenarios to protect officers and others from death or injury.

We covered it last month, discussing how police have long had the ability to deliver lethal force via a robot in the case of extremely dangerous violent suspects. It has been and always will be a viable option to protect innocent life.

The hysterical establishment media made the story of “killer robots” into something much more sensational to generate clicks and outrage. The media frenzy whipped the “can’t we all just get along” types into near-hysteria.

Of course fecal matter runs downhill and the political leaders in the city folded like a cheap suit, formally backtracking on the policy.

There’s no word as to whether those who voted to rescind the policy will volunteer to endanger themselves to apprehend an armed, barricaded violent offender instead of using a robot.

UPI has the update:

“In a complete reversal, the Board of Supervisors just voted for a military equipment policy that bans police from using robots to kill,” board member Dean Preston tweeted Tuesday. “Thank you to all the residents and civil rights advocates who made their voices heard!”

San Francisco’s board of supervisors voted Tuesday to pause the program that would allow the city’s police department to use 17 robots, armed with explosives, to kill people in “potentially deadly force situations,” such as suicide bombings or active shooter situations.

No matter what formal “policies” say, options remain for the city’s SWAT teams to continue to use robots to take bad people who present a threat into custody while minimizing risk to both cops and innocents.