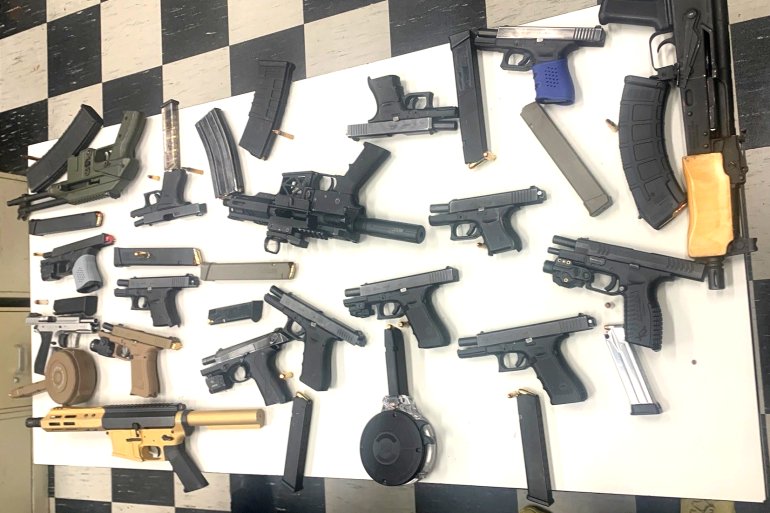 Chicago Police have their hands full. Despite local leaders who have “defunded” the police department to the tune of $80 million, the boys and girls in blue — those who are left — continue to work every day trying to put a dent in the intractable crime problem in their city.

The fifth district (005) is located in Area 2 on the south side of the city.

Look more closely at the image of the guns, above.

Obviously extended magazines and drums seem popular. But a sharp eye reveals at least five of those GLOCKS have auto-sears installed, making them capable of fully automatic fire.

The auto-sears, or “GLOCK switches” have become a new must-have prestige item among gang members, including many not old enough to drive (legally).

And for the urban set, full-auto switches are seldom prosecuted by the Soros-backed Cook County States Attorney Kim Foxx.

Gang members run free in Chicago, knowing full well that police solve very few serious violent crimes.  How few, you ask?  About 5.8% if you go by the official stats. And closer to 3.5% if you consider how crime reports are down 60%, in part because people don’t want to wait hours for a police response from the undermanned CPD. Even if police do show up to take a report, there’s obviously little likelihood they will ever make an arrest.

That leaves the residents to fend for themselves.

Meanwhile, instead of cracking down on rampant gang violence, the legislature in J.B. Pritzker’s Land of Lincoln has busied itself actually making life easier for criminals and cracking down on lawful gun owners instead. A new bill, HB-5855 is expected to pass in January, immediately making felons of any Illinoisan with two or more magazines that hold over ten rounds of ammunition.

Is it any wonder that Illinois gun stores are doing a land office business these days?