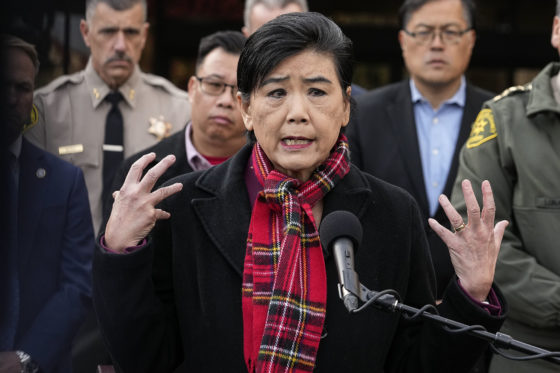 California Congresswoman Judy Chu, who represents the state’s 28th Congressional District, reportedly called for universal background checks in the wake of Saturday night’s tragic mass shooting in Monterey Park, telling CBS News it should have passed “a long time ago.”

“But in California,” noted Alan Gottlieb, chairman of the Citizens Committee for the Right to Keep and Bear Arms, “that has been the law for quite some time. The gun allegedly used in this horrible attack is already illegal in the state. Yet, Rep. Chu is making statements suggesting her state needs more gun control when it is clear the laws she wants are already on the books, and they did not prevent the tragedy in Monterey Park.”

The congresswoman also was quoted in news reports demanding to know, “Why do we have so many guns in this country and even more on the horizon? It’s not right…Other countries don’t operate this way, and we should not either.”

“For a member of Congress to make such a remark is astonishing,” Gottlieb observed. “The right to keep and bear arms is enshrined in our Constitution, which she swore an oath to uphold when she took office. Surely she must realize our Second Amendment is a cornerstone of the Constitution and its Bill of Rights.

“California has adopted some of the strictest gun control laws in the country,” he added. “The 72-year-old alleged gunman ignored virtually all of them, along with the statute against murder. If this crime demonstrates anything, it’s not that the Golden State needs another restrictive gun control law, but instead needs to take a hard look at the laws already in place to determine why anyone would think any of those laws would prevent a determined individual from committing mass mayhem.

“There are millions of law-abiding gun owners in California who didn’t harm anybody over the weekend,” Gottlieb noted, “and Rep. Chu ignores the fact that many of those gun owners have defended themselves and their families from violent criminals. Still, the first reaction from too many public officials is to penalize them for a crime they didn’t commit. We certainly sympathize with the people in Monterey Park, but asking for gun laws that already exist, and failed to prevent this crime, amounts to running in circles, and that’s not the way to make progress.”