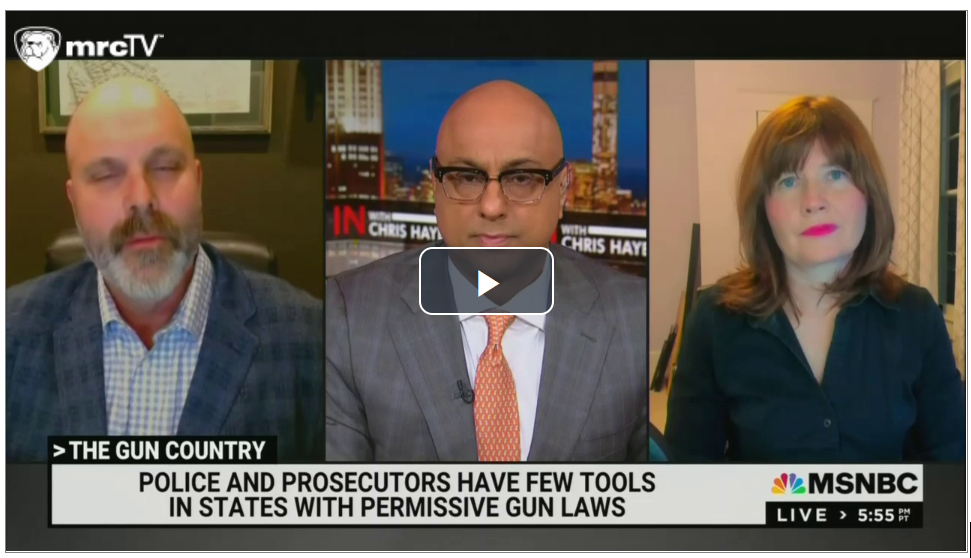 Addressing the media favorite gun owner who supports gun control, Ryan Busse, Velshi led not with a question, but a statement:

Ryan, you come from an industry, and I’m an avid consumer of the publications that come out from the industry, because they are so interesting to understand how the psyche comes around, that has built the psyche over years, that has caused demand for guns that, in most cases, people don’t need. This is not a Second Amendment thing. This is people owning a lot of guns, and the paraphernalia that goes along with it because it does attempt to normalize that sort of behavior.

Referencing a recent incident in Atlanta. [Ryan] Busse lamented, “the tragedy isn’t what’s illegal, the tragedy here is what is legal. And as you note, this guy didn’t need six loaded guns, including an AR and a tactical shotgun to go grocery shopping, right?”

He then sought out an analogy:

But yet, Georgia is one of the states that [Brady President] Kris [Brown] mentioned that has recently rolled back concealed carry permitting. I mean, I think Americans really need to think about it this way. We have about 270 million registered vehicles in the United States, and you don’t have to travel on many of our roads to know it seems pretty crowded. We have a lot of traffic laws, right? We’ve got lines on the road, we’ve got bumpers, we’ve got speed limits, we’ve got police that are patrolling everything.

We do have a lot of traffic laws and despite them, people still speed, run red lights, and conduct unsafe lane changes resulting in nasty collisions. Still, Busse declared that a main reason for gun violence is “the NRA and the NSSF and an irresponsible slice of the American gun consumers, of which I’m not one of those, I’m a proud gun owner, I hunted yesterday with my boys.”

Shortly after Busse concluded, [Ali] Velshi turned to Brown and wondered, “But how do we get folks to understand this, that when people say it’s about the Second Amendment, and the right to self-defense, people in war don’t carry the weapons that the average American has?”

— Alex Christy in Gun Control Is Like Traffic Laws, War Is More Controlled