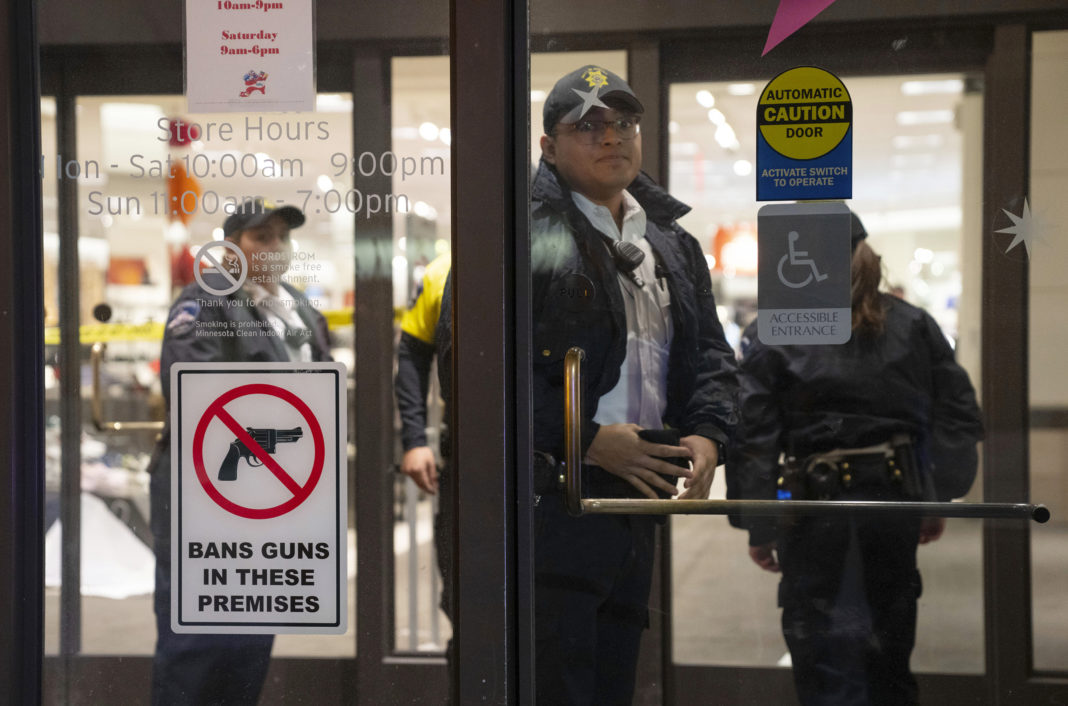 Officials lock down the west wing of the Mall of America after a shooting was reported, Friday, Dec. 23, 2022 in Bloomington, Minn. A shooting sent the Mall of America into lockdown Friday evening, mall officials and police in suburban Minneapolis said. (Alex Kormann/Star Tribune via AP)

The Mall of America in Bloomington, Minnesota forbids card-carrying good guys — you know, law-abiding citizens — from possessing legal self-defense tools there. Criminals, on the other hand, are perfectly free to disregard the “no guns” signage and have done so for years.

So when two “groups” of teens had a mostly-peaceful disagreement Friday evening during pre-Christmas shopping, things went sideways when one of the participants pulled a gun and shot a 19-year-old multiple times, killing him.

Clearly the  groups of yoots not only didn’t care about the Mall of America’s policy forbidding guns, they really didn’t give much consideration to well-established laws against shooting people and killing them, either.

Meanwhile, the law-abiders who were in the mall at the time of the shooting had nothing but harsh words to use to defend themselves against the gun-toting teens thanks to MOA’s policies.

As Bloomington police Chief Booker Hodges made clear, he had 16 cops on the beat that night in the huge mall. Yet despite the police presence and a lot more who responded to the call of shots fired, the killers escaped the property, stopping at a White Castle for a quick bite after the shooting.

It wasn’t until the next day when police finally made arrests.

From the Associated Press . . .

Five people were arrested in the fatal shooting of a 19-year-old man at the Mall of America that sent the sprawling commercial center into lockdown on one of the final days of the holiday shopping season, police said Saturday.

At an evening news conference, Bloomington Police Chief Booker Hodges announced the arrests in connection with the Friday night shooting in the Minneapolis suburb of Bloomington and said all would face murder charges, the Minneapolis Star Tribune reported.

Hodges said the arrested suspects were two men, 18, and three 17-year-old male juveniles, according to the Star Tribune, and they were taken into custody in the morning at a home in nearby St. Louis Park by SWAT team officers from three jurisdictions.

The chief added that one of the 18-year-olds is believed to be the shooter, though another suspect may also have fired a weapon. A sixth suspect was still being sought.

“In Bloomington, if you come here and murder people at our mall, you get one of these at at Christmas,” the newspaper quoted Hodges as saying while holding up an orange prison suit.

We’ve said it before, but it bears repeating. The only thing that stops bad people with evil in their hearts is a good guy with a gun, not a useless sign with make-believe magical powers. Or silly gun control laws.

Depriving the law-abiding of their ability to defend themselves is not only short-sighted and wrong, it results in more dead bodies.