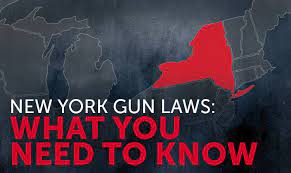 A narrow set of exceptions has been written into New York’s new gun control law, which would allow churches to hire professional armed security. But this is a costly solution, and likely to leave many people still at risk in an attack. More to the point, it does not respect the individual right codified in the Second Amendment—which is the right to defend ourselves, not to be guarded by others.

Apart from licensed guards, the law primarily makes exceptions for current and former police officers, active-duty military, and other government employees to carry guns on religious premises. This is an elitist inversion of the Second Amendment, transforming “the right of the people” into a privilege earned by serving the state.

Far from banning firearms in places of worship, several colonial-era statutes actually required that guns be brought to church. Taking this history as an indication of the Constitution’s original and authentic meaning, it is tough to argue that a total ban on this practice has any legal legitimacy based on historical precedent.

Thankfully, several challenges to New York’s gun control regime are now making their way through the courts—including a lawsuit by the New York State Jewish Gun Club, whose founder says the ban on firearms in places of worship is “unconstitutional on so many levels.” With religious freedom, property rights, and self-defense all at stake, he’s absolutely right.